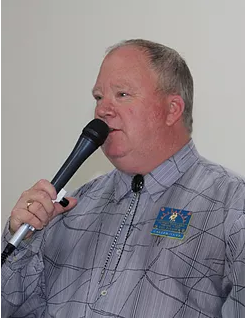 Les began dancing in 1983 by attending a learner’s class conducted by the Whitehorse Club in Melbourne. It did not take long before Les was dancing at several clubs including C City Squares, St Peters & Mopoke.

Whilst dancing at C City Squares in 1986, Les took the opportunity to call at an amateur callers night and has been calling regularly ever since. Les was also cueing easy round dances at clubs he attended.

In 1988 Les was invited to call fortnightly at a square dance group known as Latham Square Dancers. It was also this year that Les decided to learn more thoroughly round dancing in preparation to attending the 1989 National Convention. Les chose to attend the Around ‘a’ Bout North & East Round Dance clubs and was soon cueing round dances in various rhythms & levels.

Then in 1989 Les was asked to call weekly for a group known as the Early Planning for Retirement Group (EPRG) and continued to call for this group until moving to Adelaide in 1995. Of course everybody knows the reason for Les moving to Adelaide was his marriage to Anne in 1994.

Together Anne & Les founded the Sunset Twirlers Club (including Rounds) in 1995 and will celebrate their 17th Birthday in May 2012. Les has attended, called and cued at numerous functions including 23 Australian National Conventions, 1 NZ National Convention, approximately 23 State Conventions both in Victoria & South Australia and in total 16 SA & Vic Round Dance Festivals. Les and Anne have also presented both Showcase and Experimental Round Dances and conducted Round Dance Workshops at all of the above functions.