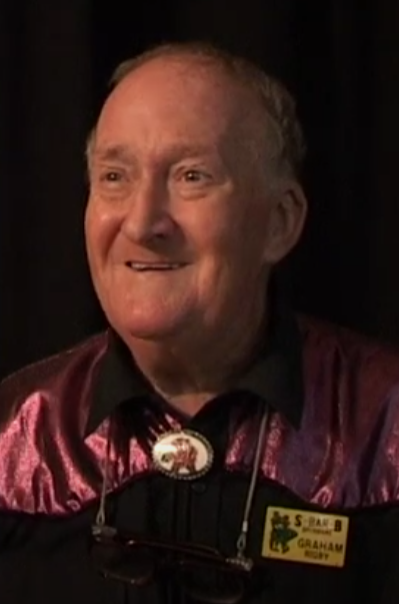 Keep smiling, keep, dancing, happy times to us all. And thanks for the memories!

Graham called square dancing at Langham Park on Wednesday nights attracting over 300 dancers who parked in a circle, then setup tables chairs and rugs so they could rest between dances and have supper later.

In 1960 he presented “TV Square Dance Club” which was a ten-minute segment viewed fortnightly on “Channel Niners”.

In 1977 Graham did a14 day tour of USA after being invited to call in Los Angeles, Texas, Omaha, New York, Chicago as well as other cities.

On Friday July 22 1988 Graham’s “Sunshine State Stylists” danced at the World Expo 88, one of his proudest moments.

Over a period of 30 years Graham and his wife Val ran a series of “Summer Camps”, the last being held in 1999. Graham held his last club night at St Barnabas Church Hall, Ashgrove after the death of his wife. he club had run continuously for a period of more than 50 years, featuring 2,145 programs, 45,044 dances and 75,075 dancers coming in the door to enjoy his entertainment.

Graham also left for future generations two books, both registered with the National Library of Australia: “Great Australian Square Dance Callers: over half a century” and “My life’s a Dance: an autobiography”.

It is no wonder that he became known as “Mr. Square Dance”.

Courtesy of Suzie Dillon is this video clip of Graham - https://www.youtube.com/watch?v=BeFWBNGawhs&ab_channel=SuzieDillon