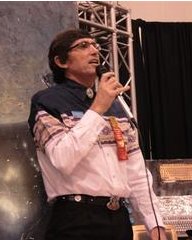 I was first introduced to Square Dancing as a compulsory part of the curriculum at Zillmere State School in Brisbane in the late 60's. While at High school in 1976, I went to my first real Square Dance with a live caller. It was here I became hooked.
The club was "Pine Rangers" run by Alan Leighton and his wife Jenny.

I entered and won the club's Amateur Callers contest in 1977, this contest was judged by legendary Queensland caller Eric Wendell.

In 1978, I joined the Royal Australian Navy and was immediately sent to junior recruit training in Western Australia. I danced most Saturday nights that year at a club called "White Gum Valley" in Fremantle.  After this I had a long break from square dancing

In 1993, I started square dancing again at "Caboolture E.Z. Squares".
By the end of that year, I did my first (very bad) singing call.
My first teaching class for "Caboolture E.Z. Squares" was in early 1995. I was calling there until the end of 2017. In 2001, "Rock 'n' Roll Squares" at Bald Hills came into being, this club continued for 4 years on the 2nd Friday of every Month.
"Northside Promenaders" started in early 2004 and is still going strong today.

I have been very involved with the QCA, ACF and now Callerlab, during my 20+ years of calling.

I have been privileged to be invited to call for a number clubs from far North Queensland to Northern N.S.W.

I was the first caller in Queensland to use CD's as my principal music player and in June 2004, I was the first Queensland caller (as far as I am aware) to switch completely digital and use a laptop computer as my music player.
I am also the pioneer in Australia, of using a USB hub for callers to present their music at combined functions.

I have been lucky enough to record 20+ vocals on 4 different square dance labels.

See you in somewhere in a Square – Glenn.