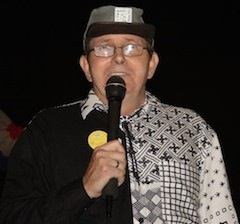 Started Calling October 1995 in Gympie Queensland while dancing with the Mothar Mountain Moonshiners.

I moved to Tasmania to Call for 'North West Coasters' in Devonport Tasmania October 97 to December 99.

Moved back to Queensland December 99 and started my own Club 'Upbeat Ch.a.o.s.' February 2000. Over the next 17 years I continued to develop my calling skills and Called more and more each week.

After losing my parents in consecutive years {2015 and 2016} I sank into depression but tried to soldier on but lost. 2017 I made a life changing decision to say goodbye to Queensland

leaving in early November. I am currently residing in Perth enjoying my new life.

February 15th 2018 is the start date of my new venture in Joondanna offering Mainstream Workshops leading up to the ANSDC in Mirrabooka which is very handy for me!